Difference between revisions of "Octave-Forge"

Octave-Forge (http://octave.sf.net) is a community project for collaborative development of Octave extensions. If you have a large package that you want to open up to collaborative development, or a couple of m-files that you want to contribute to an existing package, Octave-Forge is the place to do it. Tiny helper functions (the equivalent of e.g., shell aliases) should go in the Tips and tricks page.

Octave also needs the equivalent of CPAN so that packages such as epstk which have been developed elsewhere can be archived. Agora Octave is a fledgeling proposal to do that (talk to JordiGH about it). Before that is possible we need a packaging system which works for both Octave and Matlab (and maybe Scilab if you are feeling ambitious) without too much work on the either the developers or the users end, even for users working in a tool desert such as Windows. Feel free to expand on the definition of such a system on this page.

You can find the list of packages on the octave-forge site. To install a package, download the package file, and install it from the Octave prompt by typing

Since Octave 3.4, it is possible to download and install octave-forge packages from the octave prompt with the -forge flag

This is work in progress.

You can upload your code to Agora. The code is classified according the following criteria.

The file is full responsibility of the uploader.
Octave and Agora do not check or support this submissions.

The file(s) is(are) full responsibility of the uploader.
The bundle passes a structure check to see if it is compatible with the builtin Octave installer. This doesn't mean the bundle with install flawlessly.
Octave and Agora do not check or support this submissions.

The file(s) is(are) responsibility of its maintainer and the Agora maintainers community.
This package will install using the builtin Octave installer. 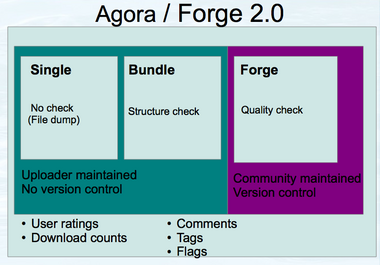 The Forge packages have must comply with

These packages are also recommended to comply with