Each of the industrial partners at the time was using its own circuit simulation software and each software had different file formats for circuit netlists.

Build the AND GATE structure directly[edit]

Build the AND gate circuit structure parsing an IFF netlist[edit]

Build the AND gate circuit structure parsing a .spc file[edit]

A circuit with a linear VCVS[edit]

The IFF netlist consists of the .cir file named "vcvs.cir" shown below

The implementation for the VCVS with linear gain is shown below 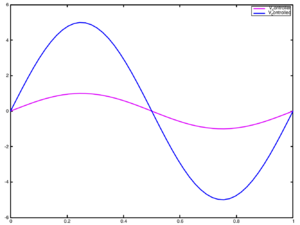 Result of the VCVS simulation

To run a simulation with this circuit use the following commands:

Creating a model for a memristor device[edit]

To demonstrate how to write a model evaluator file (SBN file), we will discuss the simplest memristor model shown in this paper by KaKiLa et al.: 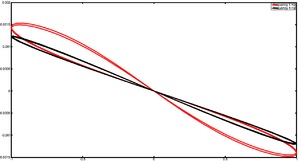 Ocs depends on odepkg that is not anymore part of the Octave Forge project. However, odepkg still works as of 2020, and instructions to install it are available in this wiki.